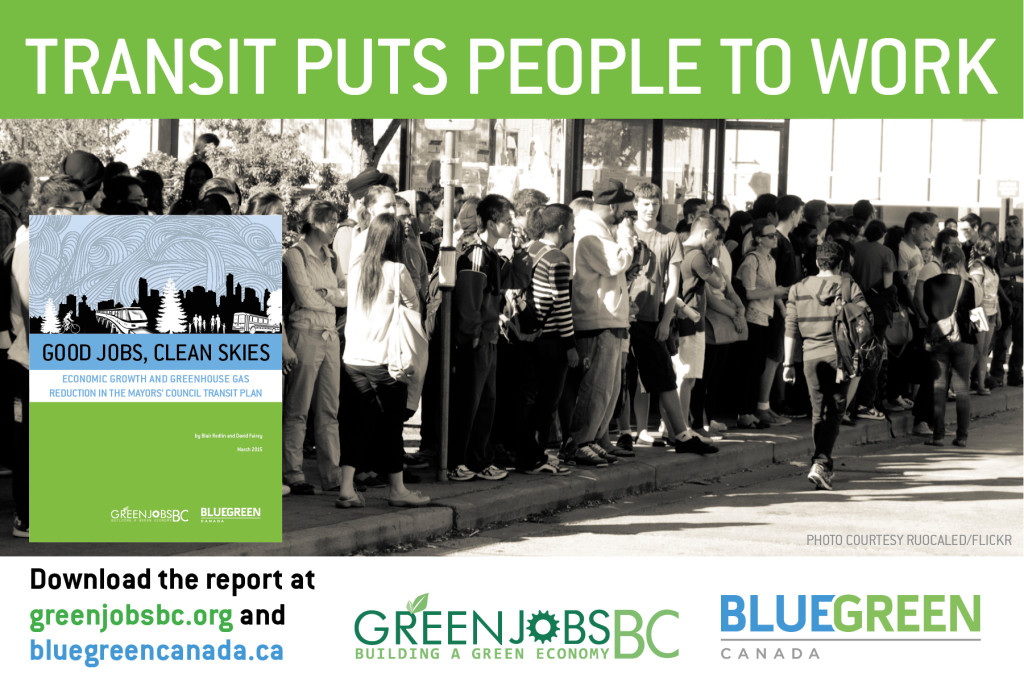 Residents who are waiting to hear the results of the vote on the $7.5 billion, 10-year transit plan proposed by regional mayors may be interested to know the results of our recent economic study for Green Jobs BC and Blue Green Canada.

One of the questions that economist David Fairey and I sought to answer was: ”How many jobs will be generated if the Mayor’s 10 Transit Plan is implemented?” We also asked about the economic impact of better transit and reduced climate stress because of fewer green house gas emissions. Along the way we found some very interesting numbers about congestion as well.

To prepare our report, we reviewed a wide number of documents from January to early March. Our findings on potential jobs and economic impacts that would result from the mayors’ transit plan are based on economic consultant reports commissioned by TransLink.

The deadline for mailing your transit ballot was Friday, May 29, with results expected by mid-to late June.

As it turns out, the number of direct jobs arising from implementing the mayors’ transit plan is significant. Currently, TransLink contributes roughly 6,000 jobs to our economy. Our analysis shows that the mayors’ plan would add another 3,600 direct jobs over the next decade.

By way of comparison, the number of direct jobs in oil and gas extraction last year, according to B.C. Statistics, was 6,200. And that was before the recent drop in oil and gas prices. If the mayors’ plan is implemented, there would be 50 per more jobs in transit by the end of the decade than in extraction of oil and gas.

The mayors’ plan would create the kind of family-supporting jobs that working- and middle-class people depend on. Transit jobs are stable, sustainable jobs that will remain rooted in the region. You can’t outsource a bus driver or rapid transit mechanic. Over its 10 years, the plan would contribute 44,000 person years of total employment, $3 billion in wages, and $4.5 billion toward GDP in Metro Vancouver. Transit investment has a multiplier effect: The study found that for every dollar invested, taxpayers get $1.48 in benefits, and private sector costs, such as those arising from the movement of goods, go down by 17 cents.

Economic consulting firm HDR found that the mayors’ plan would also cut the congestion that costs $487 million and enormous amounts of time every year. Maintaining the status quo will result in an additional $1 billion in congestion costs by 2045. By providing a way for more trips without a car, the plan would cut lost time and money by up to four per cent. Investment in new rapid transit lines, additional bus service, and a new Patullo Bridge means getting people out of traffic, giving them more time to spend with family and friends.

The plan also means real action on the climate. The effects of climate change are playing out in real time, with everybody from insurance companies to the U.S. Navy preparing for a less stable climate future. British Columbia’s greenhouse gas reduction plan aims to reduce emissions by 33 per cent below 2007 levels by 2020.

Transportation makes up a third of greenhouse gas emissions in Metro Vancouver, and investments in climate-friendly transit infrastructure are key to meeting these targets. The mayors’ transit plan would reduce greenhouse gas emissions from transportation by 8.2 per cent over the status quo, dramatically decreasing our per person use of fossil fuels.

Metro Vancouver has already embraced transit: between 2003 and 2013, the annual number of trips taken on transit increased by almost 90 million. The most recent significant transit investment in our region, the Canada Line, carries more than 122,000 people per day, already surpassing ridership projections for 2021. With a million more people expected in our region by 2045, transit will play an even bigger role in keeping our region moving.

NOTE:  Balloting closed in the transit and transportation plebiscite on May 29.  Originally published in The Tyee; reprinted with kind permission.

11,319 thoughts on “What’s at Stake in Metro Vancouver Transit Vote?”